This web contains applications the Google Adsense and Google analytics, which use cookie, more information. If you use this page, You agree with a use of cookies. The use of cookies be can forbid through properties of your web browser.

A steam piston engine, also steam engine, is a machine which is a part of a device for realization of steam cycle or it can be used in reducting pressure unit for reduction of steam pressure. Its work is usually outputted in form of shaft torque. The steam piston engine belongs to class of engines with external heat transfer (the heat is fed through a steam boiler or a parogenerator to the cycle and the heat is removed through a condenser or the steam expands to surroundings). In the same class is the Stirling engine, the steam turbine, the gas turbines with closed cycle etc. This property of the steam piston engine theoretically allows use many sources of the heat for its feed.

Principle of the steam piston engine is simple and easily understandable similar like its fundamental of construction. Through these properties was able its mass use at the epoch when the machinery industry was at a very low level.

The History of the steam piston engine is very long and in a way this is parallely a history of machinery industry. Currently, steam engines to 100 kW power input are being developed by several companies, because their thermodynamic efficiency is bigger at low power than steam turbines as seen in the chapter Difference between piston engine and turbomachine [11.]. In the Czech republic the steam engine are being developed by companies PolyComp, a.s. [2] and Tenza, a.s. [3]*. 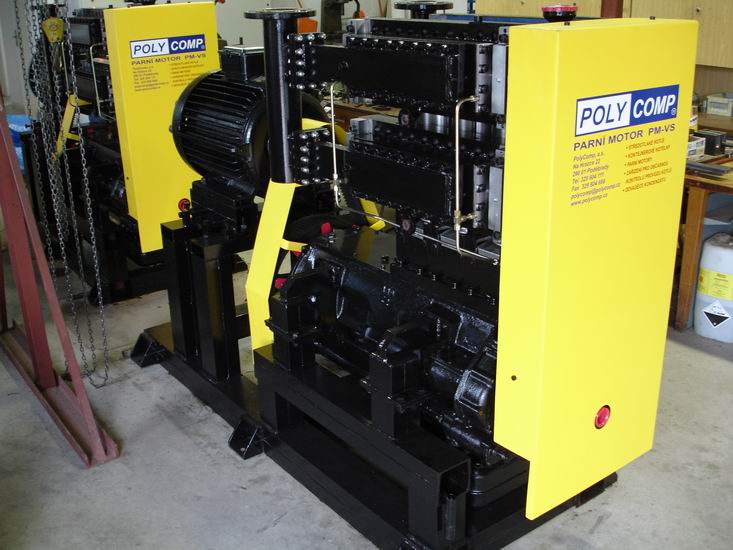 2.823 Steam engine PM-VS.
The engine is built on the block of a diesel engine, where the pistons are used as a crosshead bearings of the piston rods of the steam section. The steam cylinders are fixed instead of the original engine head. The flow of steam is controlled by rotary valves. The manufacturer offers three class of these engine about power from 10 to 75 kW. The manufacturer PolyComp, a.s. Photo [2].

The steam engine with power outputs up to 10 kW are used for various purposes and also for domestic cogeneration:

Description and principle of operation

Fundamental parts of the steam piston engine are the pistons with piston rod inside cylinder and steam distribution unit that drive the entering and the exhousting of steam from the cylinder. This force makes work through move of the piston. The work is distributed as a torque on the crankshaft:

The work cycle of the steam piston engine has four events:

The compression
Compression of Steam inside the cylinder, Figure 4d (the exhaust from the cylinder 2 is closed).

The steam piston engine is usually constructed as double-acting. In this case the cycle on other side of the piston is shifted by half duration of cycle:

Other type of the steam piston engine is the uniflow steam engine. In this case the distribution unit only controls the admission. The exhaust is controlled through the piston which is open/close of the exhaust ports during its move. The steam is flowing only one direction and the steam exhaust is not cooling entering passages:

The expansion of steam is can divided between two or more cylinders arranged in a row if it is useful. This solving is used at higher admission steam pressure, because in these cases is difucult reached require steam pressure on the end expansion through only one cylinders (piston would have to be a large stroke):

Inside the distribution units are usually used Slide valves or valves. The slide valve moves on the surface with port of channels to the piston. These ports are alternately opened/closed by move of the slide valve. One slide valve can manage of distribution of steam simultaneously above and under piston for case double-acting engine. One cylinder can contain up to four slide valves-the more the better regulation of scatter of the distribution points. The distribution unit with valve has discontinuous movement and the valves are arranged on the ends of the channels to the piston. All working volume of the cylinder must contain one admission and one exhaust valve, because steam flows only one direction through the ports. For double-acting engine be can used four valves (with an exception of a uniflow steam engine, where are only two valves):

An efficiency of energy transformation inside the steam piston engine is descripted by the internal tehermodynamic efficiency, that is defined as ratio between indicated work inside cylinder and ideal internal work of engine (work without any losses). This efficiency, for very good engines, is 80 to 85 % (exceptionally) and it is function on type of distribution unit, speed-time of thermodynamic process, state of steam, type of mechanical parts and other losses: